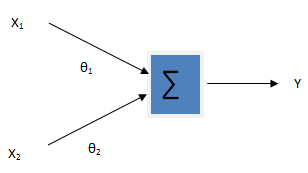 \[ Y = \theta_0 + \theta_1x_1 + \theta_2x_2 \]
Here I will discuss single variable linear regression model. We have only one variable (size of the shoe) and based on this variable we will predicting the prize of the shoe. The first job of building linear regression model is to fit the data into a straight line with minimum error. We will use the least squared error approach for this. The equation of the straight line is given by

\[ h_\theta(x) = \theta_0 + \theta_1x \]
Our job is to find the value of θ0 and θ1 that minimizes the prediction error i.e minimizes the function
\[ j = \sum_{i = 1} ^ {m} (h_\theta(x^{(i)}) – y^{(i)})^2 \]
This function is also called as cost function. Here m is the total number of training examples (100 in our example), y is the output variable ( price in our example). There are various approaches by which we can calculate the value of theta that can minimize the cost function. One of the approaches is called Gradient Descent. In this method, we decrease the error gradually by calculating the partial derivative of cost function and subtracting it from initial guess of θ. The initial guess may be [0 0] for θ. The algorithm for gradient descent is given by

Gradient descent method is a way to find a local minimum of a function. The way it works is we start with an initial guess of the solution and we take the gradient of the function at that point. We step the solution in the negative direction of the gradient and we repeat the process. The algorithm will eventually converge where the gradient is zero (which correspond to a local minimum). For more detail check out wikipedia.

Here is the source code is written in python that creates a model for linear regression.

You need matlibplot.pyplot and numpy library to run this code